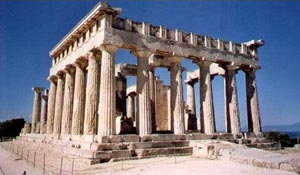 This island has a picturesque harbor with its colorful fishing kaiques is built on top of the foundations of the ancient harbor.
The island’s history dates back to the 6th century B.C. where evidence of this is given by a Doric temple which was dedicated to the god Apollo.

A better preserved example of the island’s ancient history is the 5th century B.C. temple of Aphaia. The museum in the main town contains interesting finds from this temple. More recent historic monuments of the island can be seen in its Government House when Egina was the first capital of modern Greece.

The island is blessed with a good road network and its frequent connections by ferry or hydrofoil to the mainland make it a popular island for quick, short stops. Local travel on the island is also facilitated by numerous taxis and bus service but also horse-drawn carriage, for the romantic at heart!

Other area of interest is Agia Marina, which has the largest beaches, the lovely fishing village of Perdika and of course a visit must be made to the monastery where the patron Saint of the island is buried – St. Nekterios.

Egina is also very well-known for its pistachio trees which abound on the island and considered to be the best in the world.