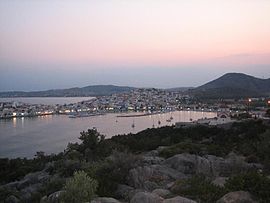 Ermioni (Greek Ερμιόνη, Ancient Greek Hermione Ἑρμιόνη, Ἑρμιών) is a small port town and a former municipality in Argolis, Peloponnese,Greece. Since the 2011 local government reform it is part of the municipality Ermionida, of which it is a municipal unit. It is a popular tourist resort.

The place has been continuously inhabited, at least since the times of Homer. Long before classical times ancient Hermione was settled by Dryopians. During the classic era it was well known for its shipbuilders and also for the production of porphyra, a very important red dye. This dye was used for the colouring of the uniforms of many armies including that of Alexander the Great. It controlled a wider region namedHermionis. Pausanias described the major temples and buildings, various festivities and sport games of the town. During the Turkish Era it was still known for ship building and its naval abilities, which played a significant role in the Greek revolution of 1821.