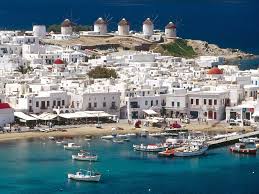 Mykonos is part of a cluster of islands including Delos, Rhenia and some rocky islets. Mykonos, already inhabited since the 5th millennium B.C. (prehistoric settlement of Ftelia), has shared with them a long and copious history with them. Its intense tourist and cosmopolitan activity, which has continiously kept Mykonos in the foreground, inevitably reminds us of the cosmopolitan ancient Delos during the period of its commercial peak (Hellenistic-roman period).
Since the fifties, Mykonos has always been one of the most popular tourist islands of the Mediterranean.
Chora, as the town of Mykonos is commonly known, impresses and casts its spell on the visitor from the first moment, with its beautiful position, scale and architecture. Despite the great tourist development of the island, it manages to maintain its cycladic features and traditional look, like few other towns.
Its cube-shaped, all white houses glow in the sunlight, scattered wisely and orderly in the countless labyrinthine alleys and streets with whitewashed cobbled pavements. A little further, on a low hill, the windmills, having stood for centuries, compose a picture of unparalleled beauty in combination with red domes and bell towers of the countless churches. In the harbour, a small colorful flotilla of caiques and fishing boats completes this unique picture with its vivid colors.
All in all, maintaining the form of the traditional architecture of the Cyclades on the modern buildings ensures a unique feeling of harmony to the town and interior of Mykonos. Nothing can be compared, though, to the emotion inspired by the enthralling space of ancient Delos. A real town with its streets and markets, public buildings and temples, luxurious houses and shops, cisterns, columns, mosaics…